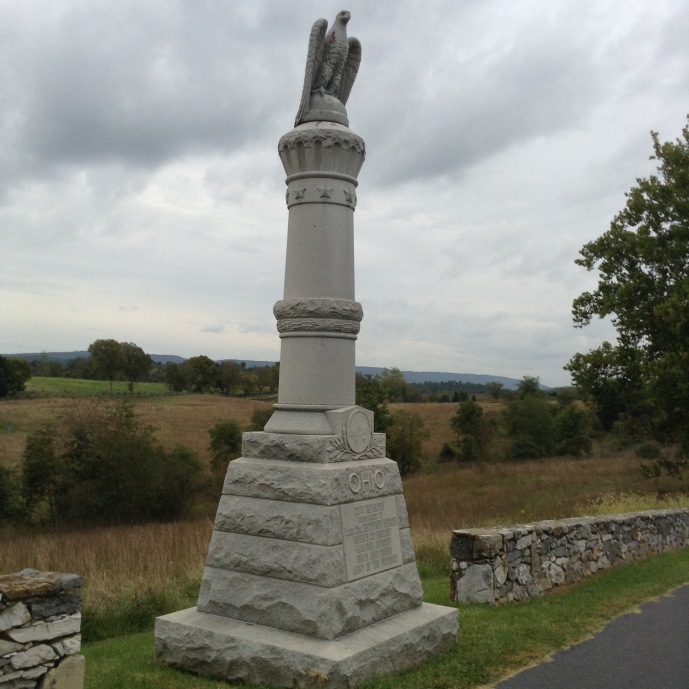 (Photos I took two years ago at Antietam Battlefield near Sharpsburg, MD.)

As I write, it’s early morning on Memorial Day when we honor those who have sacrificed their lives so that we can enjoy living in a nation that’s free. While thinking of those who

have died, we also must not forget the living whose inner pain has left them scared for life. Some are even unable to share the atrocities they witnessed, so they bear their grief alone.

I grew up about 25 miles south of the Mason/Dixon line and our three counties in West Virginia sided with the South in the Civil War. The rolling hills of the nearby battlefields are beautifully groomed national parks and thus conceal the carnage of those battles. As a child viewing the memorials and statues, I did not understand that more than 620,000 soldiers died in those terrible conflicts. Towns and the battlefields like Harpers Ferry, West Virginia; Sharpsburg, Maryland (Antietam Battlefield); Manassas, Virginia (Battle of Bull Run); and Gettysburg, Pennsylvania, were attractive to me.

In recent years as I have read about WWII, it is anything but attractive. I cannot understand the cruelty of Hitler and his army as they slaughtered the Jews and Christians who protected them, the disabled, and elderly. It’s absolutely unthinkable that one human could treat someone with such disdain. Reading Night by Elie Wiesel, which graphically depicted his experience as a teenage in a concentration camp, moved me to tears.

Today, we are saddened as we watch young American men and women return home from fighting in Iraq and Afghanistan with missing limbs and wounded emotions. And we are horrified as we see ISIS crucify Christians, rape women, destroy villages, and even kill babies. Once again I am stupefied how anyone’s ideology could justify such actions.

WWI was the “war to end all wars,” but peace lasted only about 20 years then. Now peace hardly seems possible. But we long for a lasting peace and true justice. Jesus told us in Matthew 24:6 that we would see “wars and rumors of wars,” and we know that true peace will only come when Jesus, the Prince of Peace, reigns (see Isaiah 9:6). We look for the day when “He will judge between the nations and will settle disputes for many peoples; they will beat their swords into plowshares and their spears into pruning hooks; nation will not take up sword against nation, nor will they train for war anymore” (Isaiah 4:2).