As this 2020 political campaign heats up, I thought you would enjoy this look into history.

In 1936, Democrats Franklin D. Roosevelt and his vice president, John Garner, were vying for their second term in office. Alf Landon and his running mate, Frank Knox, were the

Republican candidates. The Great Depression that had begun in 1929 was beginning to ease and the nation was recovering in small ways, but most Americans were struggling, and 14% of the population was still unemployed. People needed encouragement and hope for a better future, but they also wanted relief from government overreach.

In a rousing speech in Pittsburgh toward the end of the campaign, Roosevelt promised to balance the budget, which he also had promised four years before, and cut federal spending by 25%. The people liked what they heard, and Roosevelt won the election with the largest electoral vote in history. Over the next four years, he failed to even try to keep his promise.

In 1940, Roosevelt was again campaigning in western Pennsylvania. This would be his third term in office. His speechwriter was concerned that people would remember the president’s broken promise and asked the president what should be said. Roosevelt responded, “Deny we were ever in Pittsburgh.” His choice is recorded for all of us to see a character flaw.

I suspect everyone has broken more than a few promises—some intentionally, others by neglect, and others because of life’s changing circumstances. I’ve said many times, “I’ll call you later.” But I failed to call. I simply did not remember my promise. How many times have we—and this includes me—told a friend that we would be praying, but the moment passed, and we simply forgot? Some broken promises are inconsequential, but others lead to disappointments, relational challenges, distrust, and even people questioning our integrity and credibility. We can make excuses for our blunders, but, as usual, the best way to handle our mistake is to confess and ask forgiveness.

Breaking a promise not only hurts others, it’s also painful for the promise breaker and can have long-term consequences. We lose confidence and self-esteem in ourselves, and our reputation is marred. So Solomon gives us a clear directive in Ecclesiastes 5:2: “Do not be hasty in word or impulsive in thought to bring up a matter in the presence of God,” (NASB). Jesus said, “Let what you say be a simple ‘Yes’ or ‘No,’’ (Matthew 5:37, ESV). 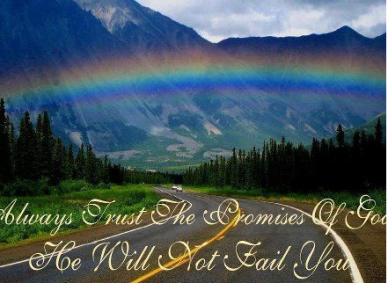 Only ONE has never broken a promise—our precious heavenly Father. He always keeps His promises. As we deal with news of the increase of COVID-19, riots in our streets, a growing crime problem, and economic difficulties, we may have a tendency to worry about the future and become overwhelmed with fear. Instead of being anxious and afraid, we can rest on God’s promise to

These are just a few of God’s promises to us. In these days when we are uncertain about whose word to trust, we can have complete assurance in God’s unchanging Word.